The mission of the Dan Gibbons Turkey Trot Foundation is to be a major contributor in the eradication of hunger and to promote long-term sustainability in DuPage County.

The DGTT Foundation is a 501c 3 nonprofit organization as determined by the Internal Revenue Service – EIN: 36-3435457. 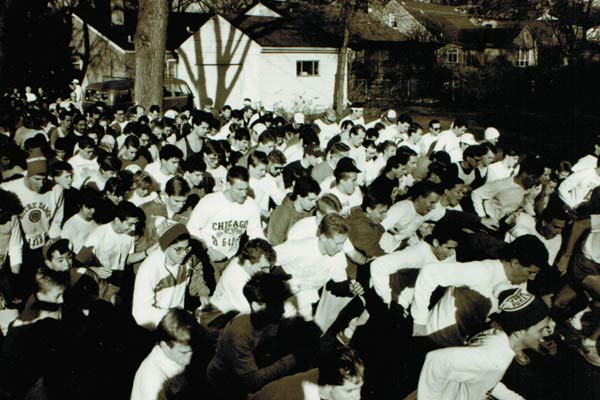 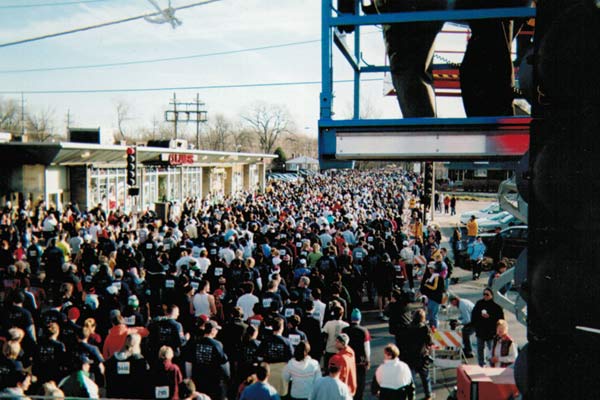 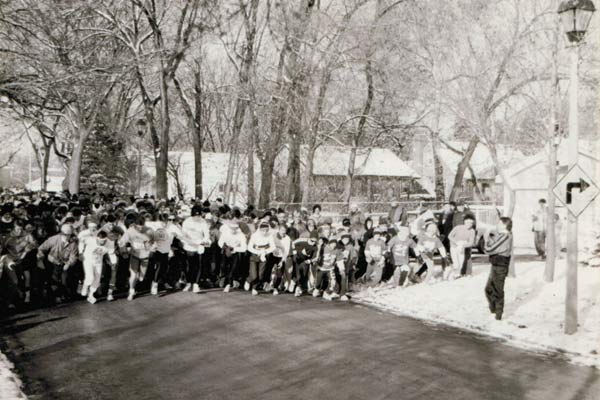 It was 1983 and Dan was listening to Ed Schwartz, overnight talk show host on WGN radio. Schwartz was angry because Mayor Jane Byrne was spending $300,000 on fireworks in Chicago for New Year’s Eve when so many people were going to bed hungry. Unfortunately, the problem wasn’t isolated to Chicago. In DuPage County, thousands of people were also hungry. This news really struck a chord with Gibbons and led to his involvement in Schwartz’s Good Neighbor Food Drive. Gibbons’ involvement with the Good Neighbor Food Drive was just the beginning of his education about and involvement with the hunger problem.

An Idea Becomes a Plan

Gibbons and some of his friends volunteered as football coaches at Visitation Grade School in Elmhurst, IL. The group was reminiscing over their most recent season when the discussion of Chicago’s hunger issues came up. A fellow coach came up with the idea to start a 5K, as they were increasing in popularity, to raise money for the hungry.

Eventually it was settled upon, they would organize a 5K Turkey Trot to raise money for families in need and provide them with food for the holidays. Gibbons had the most time to put towards the event and so the event was dubbed the Dan Gibbons Turkey Trot.

The very first Dan Gibbons Turkey Trot was organized and carried out on Thanksgiving Day of 1984. “Annual” was not in the title because no one involved thought it would happen again. Now, three decades and thousands of participants later, it seems unimaginable that the Dan Gibbons Turkey Trot might not have been a part of Elmhurst history.

The first Dan Gibbons Turkey Trot was nothing like what is seen today. Numbers the runners wore were handmade and Gibbons used his car’s odometer to lay out the course himself. The first “5K” race ended up being just a little over 2.5 miles. In its first year, the Dan Gibbons Turkey Trot had just 74 participants and no sponsors. The first Trot raised $520, which was given to Schwartz at the 2nd annual Good Neighbor Food Drive. Everyone involved felt a sense of achievement in implementing the one-time event…little did they know, it was the humble beginning of Elmhurst’s Thanksgiving Day tradition.

In September 1985, 10 months after the first Turkey Trot, Gibbons found himself in a familiar place, watching a Bears game and enjoying a couple of beers at Sunset Grill, now known as the Silverado Grill. Sitting on the adjacent barstool was off-duty Elmhurst Police Lieutenant Bob Jones. Conversation about the game eventually switched gears and Jones asked about the likelihood of the 2nd annual Turkey Trot. While Gibbons was willing, he admitted that without sponsorship, replicating the event would simply be impossible. To Gibbons’ surprise, Jones picked up his phone, called a couple board members of the Elmhurst Police Benevolent Athletic Association, an organization committed to helping local charities. Before the football game ended, Jones secured the first $250.00 in sponsorship money to go towards the Dan Gibbons Turkey Trot.

In addition to the sponsorship money, having the support of the Elmhurst Police Benevolent Association was huge, giving Gibbons the necessary credibility to take the Turkey Trot to the next level. With the Elmhurst Police Department at his side, Gibbons was able to reach out more easily to other potential sponsors.

Gibbons now had four sponsors at $250.00 each, leaving him with $1000 in working capital, enough to make the 2nd Annual Dan Gibbons Turkey Trot a reality. He recruited a small committee of family and friends to plan and implement the event and secured a home base for the event at the Knights of Columbus on York Road in Elmhurst.

When organizing the 2nd Turkey Trot, Gibbons realized the potential for an annual event and didn’t feel comfortable with it being named after him. He also didn’t want to diminish the work and effort of all the volunteers who made the Turkey Trot possible. However, the core of volunteers and sponsors prevailed convincing Gibbons of the brand value of the Dan Gibbons Turkey Trot.

While Dan Gibbons has every reason to be proud of his accomplishments, he is humble in making it known that the continuous success and growth of the Dan Gibbons Turkey Trot is owed largely to the tireless efforts put in by committee members and volunteers.

In 2010, Gibbons had a minor health setback requiring him to rely heavily on committee members. The 2010 Turkey Trot went off without a hitch and reinforced what Gibbons already knew, that the success of the Turkey Trot relies on a dedicated team of volunteers and sponsors as well as thousands of participants who come out every year in support of a great cause.

To date, the Dan Gibbons Turkey Trot has raised nearly $3.9 million dollars and takes care to keep all funds raised within the County of DuPage. The funds have provided nearly 4 million meals over the years and the event brings families and a community together on a day for giving thanks. The Dan Gibbons Turkey Trot is pleased to benefit numerous organizations including Dupage Pads, United Community Concerns Association, People’s Resource Center, West Suburban Community Pantry, Loaves & Fishes Community Services, and Catholic Charities – DuPage County.